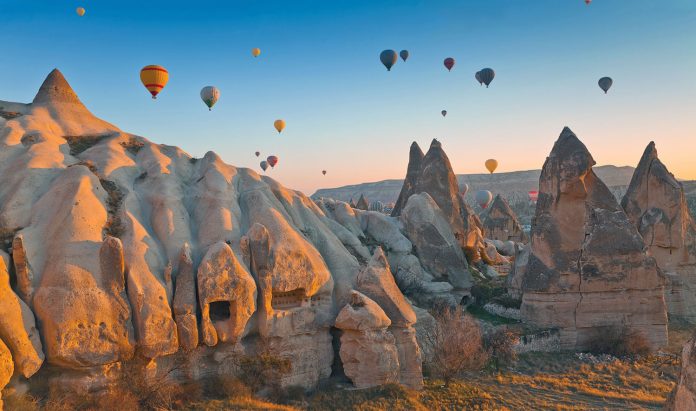 Cappadocia ranks first in terms of tourist attractions foreigners name when asked where in Turkey they would like to visit most. Its unique moon-like landscape, hot-air balloons hanging in the blue sky, cave houses and valleys what put Cappadocia on the top of many traveller’s bucket list. If you are one of them and planning a trip to Cappadocia, you are on the right place. In this article, we compile the most useful information from how to get to Cappadocia to places to see and things to do when you arrive in this magical place sitting at the centre of Anatolia. Let’s begin!

1# Why is Cappadocia so popular?

One can easily list tens of reasons why you should visit Cappadocia. It is one of Turkey’s most iconic destinations for its dreamy landscape, rock formations and hot air balloons. Bounded by towns of Aksaray, Niğde and Kayseri, it has been known as Cappadocia since the ancient times with its fair chimneys formed 60 millions years ago. Cappadocia has an outstanding legacy shaped by the hand of nature and extant. From cycling between underground cities to spending a night in elegantly renovated cave houses and taking a sunrise hot air balloon riding over the chimneys, Cappadocia offers its visitors many once in a life time activities to experience.

2# When is the best season for a trip to Cappadocia?

Because it has inland location and high altitude, Cappadocia has dry summers and cold snowy winters. This is why, as Charlies Wanderings who visited Cappadocia for five days also notes, the best time for a trip to the town is either Spring or Autumn. That said, if you are fine with cold weather, it is definitely worth to see Cappadocia’s magical landscape in snow. To get an idea, give a watch the film “Winter Sleep” by renowned Turkish filmmaker Nuri Bilge Ceylan.

3# How to get to Cappadocia

You can go to Cappadocia by bus from almost every part of Turkey. From Istanbul to Cappadocia, ticket prices start from 100 Turkish liras and the trip takes about 10 hours. You will get off at the bus station in Nevsehir and from there to Göreme, the city centre, is only 25 minutes. You can easily take a taxi or contact your hotel to arrange a transfer to pick you up. Buses in Turkey are usually very clean and comfortable. However, although they usually offer WiFi connection, it rarely works.

If 10 hours too much for you, then the plane is the option you should take. You can land in either in Nevşehir or Kayseri Airports. The Nevşehir Airport is just 40 minutes to the city center whereas from the Kayseri Airport to Cappadocia takes one hour and a half. For around 35 Turkish liras, you can take a shuttle from the Nevşehir Airport to Cappadocia. Both Anadolu Jet and Turkish Airlines provide their costumers with shuttle services. Hiring a transfer, taxi or a rental car from the airport are the other options to get to the hotel that you will stay. There is also a local city bus to the city centre that leaves the airport every hour.

4# Where to stay in Cappadocia

Cappadocia has many hotels suitable for everyone from backpackers to luxury travelers. Here we list the most recommended hotels in the region by travelers themselves.

SULTAN CAVE SUITES: This luxury hotel is probably the most famous in Goreme. It has an amazing rooftop with a crazy view of balloons at sunrise and sunset. This is where the adorable Izmir, the coker is living! The rooms are all beautiful typical cave rooms. If you want to stay there, you need to book months in advance!

ARTEMIS CAVE SUITES: This one has the same owner and is located not far from the other. This luxury cave hotel has several rooftops to enjoy the view and have tea. They have 25 typical cave rooms and a garden.

KOZA CAVE HOTEL: This hotel has also an amazing rooftop with an insane view of the city. Then the balloons are flying there come really close to the rooftop it’s amazing to see! Like the other, they have typical luxury cave suites.

MITHRA CAVE SUITES: This one has 2 rooftops where you can have breakfast and admire the city. They also have traditional caves rooms. This one is more affordable if you are traveling on a budget.

LOCAL CAVE HOUSE HOTEL: Known for its pool which can come in handy on those sizzling hot Turkish afternoons.

MUSEUM HOTEL: This stunning Relais & Chateaux hotel is a masterpiece on its own and is definitely worth a visit! I got lucky to be invited during sunrise but I have to admit that the hot air balloons were really far. nevertheless it’s a stunning hotel and if you want to splurge yourself with some luxury then this is the way to go!

5# Things to do in Cappadocia

• Wake up early, get on a terrace and watch the sunrise

Well, probably you expect to see “ride on a hot-air balloon” on the top of this list. We surely will get to that, but the first and best thing to do in Cappadocia is to get up very early and get on a terrace to watch the spectacular sunrise view with balloons hanging in the sky. Whatever the season is, don’t forget to get a little jacket or cardigan on as it will be little chilly in the morning.

• Fly in a hot air balloon

Here we are. Flying in a hot air balloon should definitely be on your to do list while in Cappadocia. Imagine yourself on a hot air balloon, flying over the world famous fairy chimneys and the once camouflaged churches. The spectacular surrealistic landscapes combined with excellent flying conditions allowing the balloons to gently drift over and between fairy chimneys, pigeon houses hewn into the unique rock formations, orchards and vineyards through impressive valleys, each with distinctive rock formations, colours and features and then float up over rippled ravines for breathtaking views over the region. These make Cappadocia one of the most popular spots in the world to go up in a hot air balloon. Get ready for one of the most exciting experiences ever.

According to the Will Fly For Food, the Red Tour is one of the best things you can do in Cappadocia outside of the hot air balloon ride. It’s a great introduction to the area and takes you to the most striking spots in northern Cappadocia. If you were to do just one tour (other than the hot air balloon), then he suggests doing this one. Here is a quick rundown of all the stops you would make on this tour:

You can book the Red Tour through Get Your Guide: Option 1, Option 2.

• Indulge in the local cuisine

“If I had to name one of my favourite cuisines, Turkish food is right there in my top 5,” writes Charlies Wanderings, “The Turkish cuisine is a fusion of Central Asian, Middle Eastern, Eastern European, Armenian and Balkan cuisines.” She recommends Dibek, a local restaurant where you can indulge in famous pottery kebap! 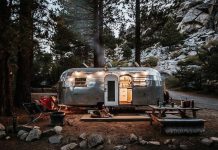 Everything you need to know before traveling to Fethiye

Everything You Need to Know Before Traveling to Cappadocia